The Cancer Research Institute held its annual “Through the Kitchen” benefit party yesterday evening, Sunday, May 6, 2018. This year marks the 35th anniversary of this coveted event, a favorite for New York City's elite. Since its inception, this party has raised more than $18 million to support postdoctoral fellows.

Guests are invited to walk “through the kitchen” at The Pool & The Grill restaurants at The Seagram Building along Manhattan's posh Park Avenue, helping themselves along the way to culinary delights served up by the restaurant's team of professionals.

CRI Trustee Lauren Veronis has spearheaded this event since it started and she and her husband, John, (who each gave a smile to our photographer for the picture below) worked with dedicated co-chairs and members of the benefit committee to create a festive occasion to support an excellent charitable cause.

Each of the tables is meticulously decorated according to the evening's theme—a closely guarded secret each year—and this year's theme was Magazines. Titles included National Geographic, Time Out New York, Martha Stewart Living, Psychology Today, National Enquirer, and Playboy—and those were the less risqué of the lot. For whimsy, images of select guests were Photoshopped into the covers—giving them a moment in the spotlight (and lots of laughter along the way).

The evening began in The Grill, which for this purpose featured tumblers full of a special cocktail and flutes of sparkling wine at the ready (not to mention two well-stocked bars) and, to add some balance, a hot dog stand serving up wieners to those preferring them to the lavish passed hors d'oeuvres. Following the hour of good-spirited elbow rubbing, guests then proceeded to dinner at The Pool by way of…the kitchen, of course! The ticket for admission was to don an apron designed just for the event.

While going through the kitchen, guests filled their plates with delectable morsels from cultures all around the world, ranging from sushi (with cleverly named pieces like SalMen’s Journal Avocado Roll) to classic Italian dishes with a unique twist (“Fusilli con Family Funghi”), a raw seafood bar, prime cuts of several kinds of meat, gourmet salads (“Good Housekeeping Chopped Salad”), Asian cuisine, and Southern cooking (like “Getting Baked Beans”—perhaps that one's a reference to the High Times table). Take a look at the menu below to grasp the diversity of options facing our guests as they forded the culinary panoply.

The guest list on Sunday included a number of distinguished New Yorkers. Among them were former New York Governor George Pataki, New York State Comptroller Tom DiNapoli, philanthropist and strategic investor Kenneth Langone, former NYPD Police Commissioner Ray Kelly, and philanthropists Jo Carole Lauder and Judy and Leonard Lauder, to name only a few. Perhaps the biggest superstar in the room, however, was CRI Scientific Advisory Council associate director Jedd D. Wolchok, MD, PhD, a leading clinical gastronomist—oh, wait, we meant oncologist—whose work led to the first FDA approval of a new class of immunotherapies called checkpoint blockade. He and his wife, Karen Popkin (both in the photo below) made sure to sample all the best of the evening's cuisine—though it's a mystery how they got as far as the seafood station with so much room left on their plates…we suspect they nibbled along the way, a smart strategy for the eager gourmets among us.

Let's not forget that this is all for a great cause. Funding the next generation of leaders in cancer research—something we could only do with donor support—is the easiest way for those who are philanthropically inclined to make the greatest impact on the lives of cancer patients and on the history of cancer treatment.

We are thrilled to announce that this year’s event raised $1.4 million, enough to fund six promising postdoctoral fellows over the next three years. Renowned auctioneer Jamie Niven sold generously donated items to bolster the evening’s fundraising, including two paid internships at Bloomberg, dinner for ten at The Grill restaurant, and numerous works of art by well-known and up-and-coming artists. In addition, guests were offered the opportunity to bid on a fully funded named fellowship, or to combine pledged amounts, which alone totaled enough support for three fellowships. What a fantastic display of generosity!

Check out more photos from the evening in our album: 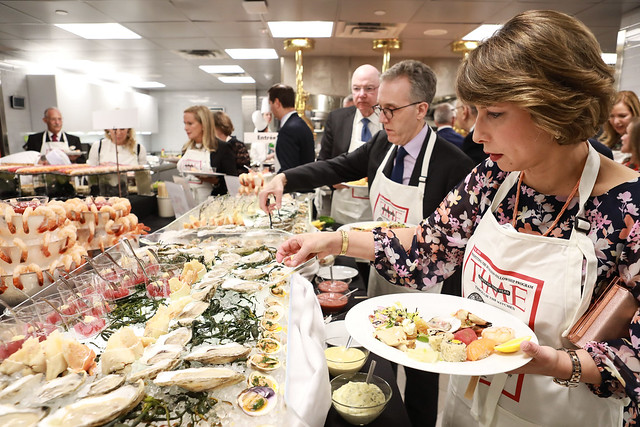 The evening concluded with a spectacular dessert and coffee display on the mezzanine. Thanks to all those in attendance, this year's Through the Kitchen was one of our most successful, and we are grateful to all those who gave their support.

We'd like to also thank the following for working so hard to make the party a great success:

2018 Through the Kitchen Co-Chairs