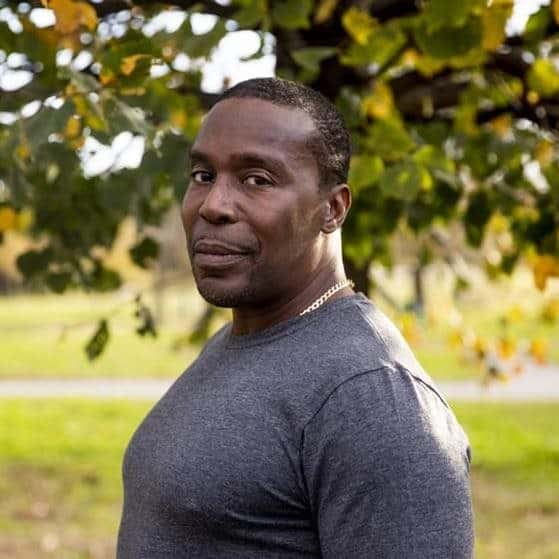 Immunotherapy makes it possible for you to win because you have a partner in the fight.

On New Year’s Day 2017, Oswald went to urgent care feeling terrible—he was weak, tired, and unable to exercise—and was sent home with an inhaler and unknown diagnosis of either pneumonia or COPD.

When he went to Columbia University Irving Medical Center (CUIMC) for a physical exam, his doctor sent him to the emergency room where they took a biopsy from his lung. A week later, the biopsy came back showing he had stage 4 non-small cell lung cancer, which had spread throughout his body, including his lymph nodes.

His doctor told him the checkpoint inhibitor that targets the protein PD-1/PD-L1 on T cells, pembrolizumab (Keytruda), was his best treatment option. Oswald received the first immunotherapy infusion in February 2017 during a three-month hospital stay. He was never alone in the hospital; his friends came to visit him daily and did not allow him to give up hope.

Scans showed that the cancer shrank dramatically after his second infusion. Oswald was able to put weight back on, resume work at his nonprofit, and get back to the gym. Almost three years later, he receives immunotherapy treatment every nine weeks. His friends are happy to now be able to tell the story of how their friend beat cancer.

CRI: How and when did you first learn you had cancer?
Oswald: On New Year’s Day 2017, I could barely walk. It took everything I had just to stand up. Looking back now, I realize that there were a lot of things that were getting more difficult for me to do leading up to January 1, like walking up steps and carrying things.

I went to urgent care where they did an x-ray. They thought I had pneumonia or COPD because I was a smoker at the time. They gave me some antibiotics and sent me home.

Seven days later, I hadn’t gotten any better, so I called a doctor at CUIMC and she told me to come in. When I arrived, she sent me to the emergency room to have some tests done. They decided they were going to keep me because they weren’t sure what it was. Cancer hadn’t even come up yet.

After three and a half weeks, they took a biopsy of my lung and about a week later they confirmed it was not only cancer, but a very advanced form of it. I had cancerous nodules on my chest that spread to my spine. I had stage 4 lung cancer.

CRI: How did you learn about immunotherapy and why did you decide to do it?
Oswald: While I was at CUIMC, a doctor walked in one day and said there was a new treatment for which I was an extremely good candidate. It had just come out of the experimental stages, and they were using it for patients that present high levels of the PD-L1 biomarker. Mine was very high.

So, when you’re lying there with oxygen in your nose and an IV on your arm, you’re open to all the options. I said, “Fine. We’ll do it.”

I went home for about two days, and then came back to the hospital for my first dose of the immunotherapy. Almost immediately I felt different. I don’t know if I want to say I started feeling better, but I felt different.

CRI: What was treatment like? Did you have any side effects?
Oswald: I went back in to CUIMC every three weeks for my treatment. By my second treatment, I had already started to put weight back on. My skin was looking great, I was going to the gym, I had my energy back, and my appetite was good. It was really a quick turnaround.

I went from not being able to walk across a room to being able to be on the elliptical for an hour. You go into immunotherapy thinking you’re going to have some good days and some bad days. I’ve had a lot of great, great days.

CRI: Are there things that surprise you about the cancer experience?
Oswald: When I got diagnosed with stage 4 lung cancer, I was in a place where I was willing to try anything. Immunotherapy saved my life.

Immunotherapy gave me a second chance and I wanted it. I hadn’t felt like that in a very long time. It was the immunotherapy, the way it reacted, and the confidence of the doctors and of course, my friends, that made me want to live again. It made me feel like, “you know what? You’re still here.”

CRI: What would you want another patient to know about immunotherapy or about participating in a clinical trial?
Oswald: My number one advice is to find out as much as you can about as much as you can. I didn’t know about immunotherapy. Most people out there think chemo and radiation when they hear cancer. You need to be open to the newness of immunotherapy. We’re so used to having medicines do the healing as opposed to having medicines reprogram our bodies.

Sometimes, when you feel that your body is already ill, you might not feel your body has that fight left in it. But immunotherapy helps you fight that fight because it teaches your body to fight it.