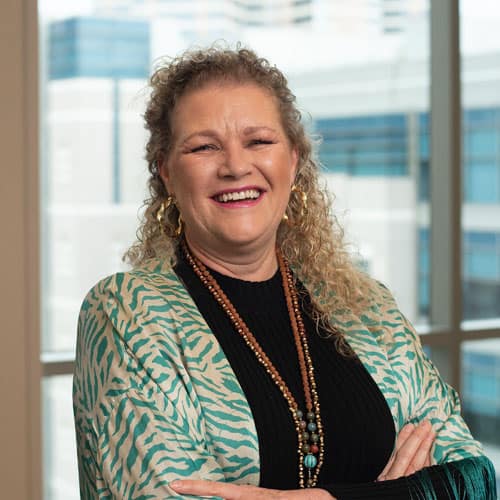 The Lord's Prayer and thanking God for every day.

Isolde’s father passed away from melanoma when he was only 39 years old and Isolde was 7. As a result, Isolde was very careful, always wearing sunscreen and having regular skin exams. When she was diagnosed for the first time with melanoma in 1999, she was shocked. At that time, a surgery removed the melanoma and soon she was cancer-free.

Almost two decades later in 2017, after running from a fire in her office building, Isolde discovered a large bruise on her stomach and immediately went to see a radiologist. The ultrasound revealed that, as she was running to safety from the fire, a six-inch tumor had moved closer to the surface resulting in the bruised skin. A scan revealed that, this time, the cancer was metastatic.

At the recommendation of Dr. Alfeiran, Isolde immediately started an immunotherapy called pembrolizumab which blocks the PD-1 pathway and helps the immune system identify and attack cancer cells. Six months later, Isolde’s scans showed that her tumors shrank significantly, and she had a complete response.

In 2017, Isolde traveled from her home in Mexico to attend the CRI Immunotherapy Patient Summit in New York City where she was grateful to meet experts and have many of her questions answered. Today, Isolde is focused advocating for patients, and recently founded IMMUNE, the first melanoma foundation in Mexico.

My oncologist told me this was my best option treatment and I started immediately, though I didn’t have much information at that time and I was overwhelmed by the news. I started searching for information on the web and found the CRI Immunotherapy Patient Summit in New York in September 2017. I decided to attend the summit, and that is where I learnt how immunotherapy works in a detailed way, as well as what my chances were of survival with immunotherapy. I was so inspired by the stories of other survivors that I promised myself I would advocate for other patients in Mexico.

Treatment went so well for me. I looked so healthy that no one noticed what I was going through. I told my team in the office that I may have problems with my memory or difficulty speaking, but I never did. I had my infusion on a Friday and rested over the weekend, so by Monday I was recovered and ready to go to work. I had a normal life, came to work as any normal person, and nobody noticed I was ill.

My doctor decided to delay my treatment for a week only once when my liver enzyme levels were high.

I didn’t go through any other treatment before immunotherapy.

It absolutely changed my life, my perception of priorities and most of all it was a paradigm to me and my family as I am the third generation with melanoma in my family and the first one to survive. “C” is not for “Cancer” anymore , “C” is for “Cure”!

Immunotherapy is the best treatment option for melanoma and maybe for other cancers as it makes your whole immune system work and respond to destroy tumors in a systemic way. Do whatever your doctor says, attitude means everything, see yourself as a survivor that will go through a journey, but keep your eyes in the goal. Stay positive!