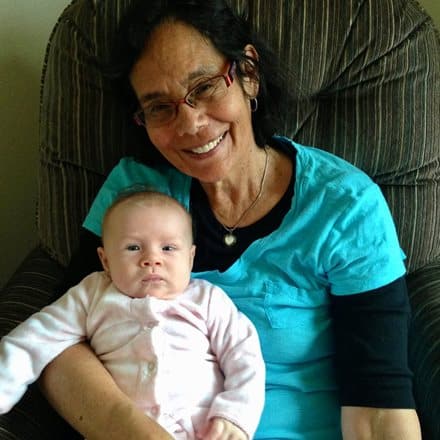 One day at a time.

In January 2013, the week before a trip to Machu Picchu (Peru), Shann felt more fatigued than usual and saw her doctor on San Juan Island. Her doctor ran blood tests and urged her to go to a hospital for further blood work.

Within a few days, she was admitted and began standard chemotherapy treatment for acute lymphoblastic leukemia. After an experimental haploid bone marrow transplant, Shann and her family enjoyed two years of remission. Then, in 2017, the cancer returned. Shann decided to try CAR T cell immunotherapy, which put her into another two-year remission.

When her cancer returned once again in 2019, she tried an anti-PD-1 immunotherapy, but it did not work and led to side effects. A few months later, she began another type of immunotherapy: a bi-specific T-cell engager (BiTE) that allows the patient’s immune system to recognize and attack cancer cells by targeting the CD19 antigen on B cells. Her cancer responded.

CRI: How and when did you first learn you had cancer?
Shann: I learned I had cancer in 2013. My general practitioner made the diagnosis based on my fatigue and skewed blood tests.

CRI: How did you learn about immunotherapy and why did you decide to do it?
Shann: My oncologist suggested immunotherapy.

CRI: What was treatment like? Did you have any side effects?
Shann: The day after my first CAR T cell infusion in 2013 I developed serious side effects—a fever and neurotoxicity—and had to go into the hospital. It was a mild to moderate cytokine storm. I was released after one night in the hospital, but had to go back the following day when I momentarily lost consciousness at home. After these two hospital confinements, I recovered quickly and was able to go home with no further treatment. I did have a near bone marrow failure in the months following the CAR T cell therapy, but that turned around slowly.

When the leukemia returned in 2019, the oncologist put me on an experimental trial with pembrolizumab (Keytruda®). At first, it seemed to work, but by the second infusion, the leukemia cells began to show on scans again, so the oncologist took me off the trial. About two weeks after the last Keytruda® infusion, I had an intense autoimmune reaction involving my skin and nerves. I was given a steroid, prednisone, which helped reduce the side effects. The steroids, however, delayed the start of my next immunotherapy: blinatumomab (Blinctyo®).

When the skin reaction cleared up, I went into the hospital to be hooked up for a Blincyto® infusion, 24 hours/day for five weeks. I went into the hospital three times for infusion hookups and had side effects each time, but they waned in power. The initial side effects were very similar to my reaction to the CAR T cell infusion. For the final two infusions, I managed to do a home infusion with Providence. I had very mild side effects during and after these final infusions. The plan going forward is to end the Blincyto® and hopefully stay in remission.

CRI: Are there things that surprise you about the cancer experience?

I am relieved to be part of the movement away from chemotherapy. I believe in immunotherapy so much more than the chemical warfare of chemo.

Cancer treatment can be frightening, so learn as much as you can about immunotherapy in advance. In the end, you just have to hold your breath and jump in, hoping for the best. I think a reasonably strong constitution can handle most of what immunotherapy throws at it, if your disease burden is not too high. If I need to do it again, I will.