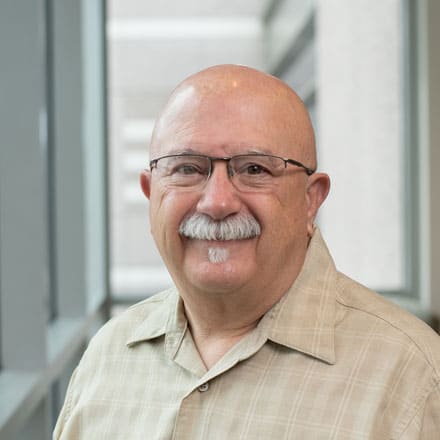 Don’t ever give up!

Ron was initially diagnosed with muscle-invasive, high-grade urothelial bladder cancer in September 2013. His urologist in McAllen, Texas, referred him to MD Anderson, where he was introduced to Dr. Jianjun Gao, who agreed to prescribe and oversee an eight-week course of chemotherapy administered in McAllen.

In January 2014, Ron had surgery to remove the bladder, prostate, and lymph nodes. One year later, CT and bone scans showed the cancer had metastasized to the bones. At this time, Dr. Gao told him the future was bleak and, at most, he had six months to live.

In April 2015, however, Ron underwent tests and Dr. Gao called him to let him know that he was approved to participate in a clinical trial combining the immunotherapies nivolumab (Opdivo®) and ipilimumab (Yervoy®). Ron and his wife, Brenda, drove the six hours from McAllen to Houston every 10 days from April to August that year for tests and treatment. Ron’s last treatment was in September 2015, following four combined doses and seven single doses of immunotherapy.

In March 2020, six years after diagnosis and four years out of treatment, he remains stable. After retiring from law enforcement in 2000, Ron and Brenda now enjoy traveling the country in their Airstream.

CRI: How and when did you first learn you had cancer?
Ron: After finding blood in my urine in September 2013, I consulted my primary care physician who referred me to a local urologist. The urologist did a cystoscope exam and biopsy which revealed the tumor was invasive and malignant. He referred me to MD Anderson for further treatment.

CRI: How did you learn about immunotherapy and why did you decide to do it?
Ron: I underwent chemotherapy treatment prior to surgery. When I found out the cancer had metastasized, Dr. Gao advised that chemotherapy would not be successful again.

With no further alternatives available to me, my wife, Brenda, and I waited for word of a possible trial to open. Within a few months Brenda and I were summoned back to Houston for the good news: a trial was about to begin but before enrolling, I had to qualify. After proceeding through the qualifying procedures, I gladly enrolled in the trial, and began receiving two immunotherapy drugs.

I decided to participate in the immunotherapy clinical trial because there was no other alternative for me. I figured if it worked, good for me, and if not, at least I would be helping with research. That research, I hoped, might help someone else fight this nasty disease.

CRI: What was treatment like? Did you have any side effects?
Ron: Basically, the treatment consisted of three to four hours of intravenous treatment with nivolumab and ipilumumab. I received the combined immunotherapies for about four months, from April through August 2015.

Side effects included a slight feeling of an electrical charge throughout my body followed by a draining feeling of a much-needed nap. In my case, the only side effect was that my thyroid blew a year after completion of the trial.

CRI: Are there things that surprise you about the cancer experience?
Ron: I was astounded by the kindness and support of other patients, my medical team, and the entire staff at MD Anderson.

They all truly cared about me and gave me hope. It was through their dedication to research that I had a fighting chance to survive and they supported me wholeheartedly. Every time I went in for a procedure or a visit with the doctor, the MD Anderson staff made me feel like I was the most important person to them. No one ever looked at a watch and hurried away. I was the focus.

CRI: What would you want another patient to know about immunotherapy or about participating in a clinical trial?
Ron: When you are offered this opportunity, take advantage of it. I think it is beneficial to both yourself and to future patients to participate in clinical trials. With every passing day, new data is developed and new ideas are discovered which give hope to the ever-changing face of this disease and its treatment.