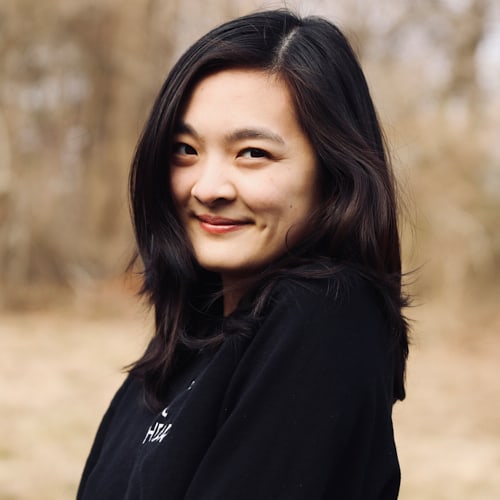 Give joy to feel joy.

Sonia Su is the founder and executive director of Kits to Heart, a Maryland-based nonprofit that gives thoughtfully designed, curated cancer care kits to patients and caregivers. Sonia was diagnosed in January 2018 with an aggressive type of non-Hodgkin lymphoma. Over the course of a year, she relapsed twice and received her last treatment in March 2019, when she was admitted for CAR T cell therapy. Sonia was so surprised to see a sweet care package left on her hospital bed from a former patient, resolving to pay the kindness forward.

During spring 2020, Sonia spent her final semester of graduate school at Georgetown University to launch her nonprofit. Sonia is a 2020-21 Ulman Foundation GameChanger honoree, serves as a First Connection volunteer for the Leukemia & Lymphoma Society, and is a Matt Kurtz Kindness Award recipient.

I had been experiencing persistent chest pain and superior vena cava syndrome. Scans and a core biopsy confirmed that it was lymphoma.

I had heard about CAR T cell therapy through consultations with other oncologists. I am fortunate to be within a reasonable distance of some of the top hospitals, so learning from the National Institute of Health (NIH) that CAR T cell therapy was an option for me at the University of Maryland Medical Center (UMMC) literally saved my life.

CAR T cell therapy works essentially by using our bodies’ own T cells and programming them to attack the cancer. The three-week waiting period from when your cells are collected to being admitted for the infusion was agonizing. The pre-conditioning chemotherapy days before had wiped me out mentally and physically, so I appreciated the relatively uneventful infusion of the T cells. Since CAR T cell therapy is known to have some pretty scary side effects—namely, neurological toxicities—it was expected not only to spend at least a week in hospital, but also land in the ICU. Once a fever started, it was not long until I started feeling very ill and largely unconscious. After two days, however, I was feeling better and had to spend a few more days in-patient before being discharged. Fatigue was the main side effect afterward, but I have been doing well ever since.

Unlike traditional therapies, CAR T cell therapy has given me two years and counting. My stubborn tumor had not responded to the first two lines of chemotherapy, which were extremely taxing and spread out over several months. In contrast, excluding the pre-conditioning chemo, CAR T cell therapy was one infusion and felt like a miracle after two relapses.

Especially as a young adult patient, the fact that many things surprised me itself should not be a surprise. For example, there was no discussion of fertility preservation until after relapsing, when I had to prepare for a stem cell transplant (which ended up being canceled). Generally, I did not expect to have such negative experiences with certain medical teams, so I felt particularly grateful when UMMC took me in for CAR T cell therapy. Overall, I was surprised to experience the love and support from my family and complete strangers—including the stranger who gifted me the care package that inspired me to start my nonprofit. Sure, there may be those who cannot show up for you during difficult times, but new bonds are also forged from such experiences.

Based on my experiences with CAR T cell therapy, I truly believe in and wish for a future where CAR T cell therapy becomes the first-line treatment. Given the increasingly rapid advances in medicine, never lose hope!