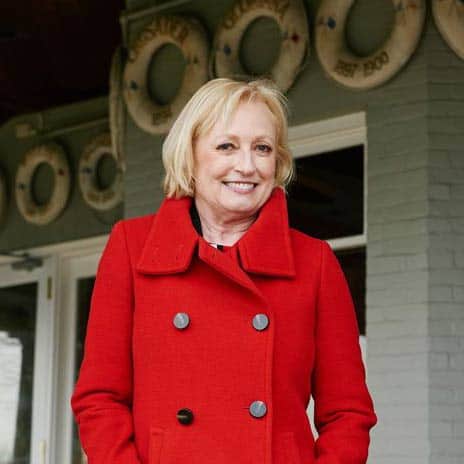 Cancer research not only saved my life but will potentially save members of my family.

In 2005, Adrienne learned she had Lynch syndrome, an inherited genetic mutation that significantly increased her risk for several types of cancer. Eight years later, she was diagnosed with metastatic ampullary cancer. She underwent 13 months of chemotherapy, which did not work. When genetic testing of Adrienne’s tumor showed it was microsatellite instability-high (MSI-H), her oncologist recommended she enroll in a clinical trial for pembrolizumab (Keytruda®). Just over two months later, the cancer was gone. She continued to receive treatment for two years, traveling from her home in New York to Johns Hopkins in Baltimore. Over two years since her last treatment, she remains cancer-free and has returned to her busy life working, spending time with her four daughters, practicing yoga, playing tennis, and traveling with friends and family.

I had just had a short haircut and was sitting on the steps in my house under a skylight playing with my one-and-a-half-year-old daughter when my wife looked down and noticed a spot on my scalp. So I went to a dermatologist who conducted a biopsy. Two days later I had the results and was immediately referred to the John Wayne Cancer Institute for treatment.

My first clinical trial was for a vaccine and each arm of the study included an immunotherapy booster. When I started trial three, biochemotherapy, it included two immunotherapies, IL2 and Interferon. My sixth and pivotal trial was with ipilimumab, which became Yervoy once approved by the FDA. In each case, there were limited options available to me and I chose to keep pursuing treatments to stay alive. Whether it was immunotherapy or chemotherapy or surgery, I wanted whatever gave me the best chance of preventing recurrence or later surviving.

Treatment on Yervoy was not bad at all. I would drive about three hours to San Diego from Los Angeles post-treatment and get into bed as I would get achy by then and really be ready for sleep. Next day I would head to the gym. I had some of the main, initial side effects which I was told were positively correlated with a response to the drug, so I was happy to get them. I developed severe diarrhea which was treated with steroids. I developed a horrible itch which is not easily treated. But the alternative was death so I’m OK with that. My advice is listen to your nurses and doctors and report all side effects as instructed. There is never anything to be embarrassed about and they are there to help.

Immunotherapy saved my life. In my humble opinion, nothing else compared. The side effects were tolerable and treatable, and the disruption to my life was minimal. Other than the one day I was required in Los Angeles, I never skipped a beat.

Probably the most significant surprise is how people react. There are some whom you expect to be there every step of the way for you who are incapable of dealing with cancer and treatments. And there are others who show up out of virtually nowhere who really get it and are there for you.

Given that I enrolled in six clinical trials in my journey, I am obviously a believer in participating in clinical trials. The first kept cancer away for at least five years, while the last saved my life. Along the way, the other trials mostly kept me alive while waiting for the ultimate trial that succeeded. Immunotherapy simple fits in that realm and is absolutely worth trying if your doctors believe it is the best option for you.