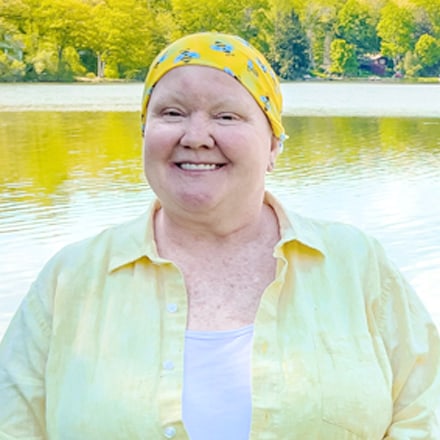 I think immunotherapy is the greatest thing since sliced bread.

In 2010, when Donna was 43 years old, she was diagnosed with a rare type of skin cancer—infundibulocystic basal cell carcinoma. She was told that any one of the thousands of lesions on her face and body could metastasize, or spread, at any time.

Donna’s local dermatologist referred her to NYU Langone’s Perlmutter Cancer Center—an institution on the cutting edge of treatments available for her cancer type. After several months of research and finding a second opinion, Donna found two doctors, John Carucci, MD, PhD, a professor and director of dermatologic surgery at NYU, and Anna Pavlick, D.O., a director of melanoma and cutaneous oncology at Weill Cornell Medicine.

She met first with Dr. Carucci, who advised her that surgery was not an option for her as the number of lesions was so immense that it could take a lifetime to remove them one by one. In lieu of surgery, Dr. Carucci came up with a plan of experimental treatments and eventually recommended a clinical trial of the drug sonidegib (Odomzo®), a type of targeted chemotherapy. Donna was on the clinical trial for four-and-a-half years. The side effects were debilitating. She had severe muscle cramping, hair loss, loss of taste, and GI pain. By 2016, when her weight dropped to under 100 pounds due to intestinal blockages and subsequent surgeries, she stopped the trial.

At that time, immunotherapy was showing promise for basal cell carcinoma and her doctors assured her that there would be an immunotherapy available to her soon—it was just a matter of time.

After a couple years, Donna’s basal cell lesions started to return and the chances of one basal cell progressing into a metastatic cancer increased. Then, in 2018, Donna heard from both Drs. Carucci and Pavlick: there was an immunotherapy clinical trial of cemiplimab (Libtayo®) for which they thought she would be a perfect candidate.

Donna was put on a waiting list for the trial. Luckily, a few days before Christmas in 2018, Dr. Pavlick called Donna to tell her a spot in the trial had opened. Donna immediately headed to NYU to enroll in the study, and by early January 2019, was receiving her first infusion. Her doctors were “shocked and excited” at how well she has been responding to treatment with minimal side effects.

Today, Donna enjoys spending time with her husband and two sons. Since her diagnosis, Donna has urged her family members to have their skin checked. Her sister, two brothers, and two nieces have had precancerous squamous cell or basal cell carcinomas removed. She feels strongly about sharing her story and paying it forward.

I started the immunotherapy clinical trial in January 2019 for my basal cell carcinoma. Every few weeks I would go in for an infusion. It was incredible compared to my previous treatments. The only side effect I experience is fatigue in the few days after each infusion.

Listen carefully to what your doctors are saying to you.

I know that people have gone before me and done clinical trials, which have led up to being to where we are today. I’m thrilled to be a part of a clinical trial, to hopefully help someone else down the road, and to make it easier for them.